In-depth reporting, data and actionable intelligence for policy professionals – all in one place.

A collaborative journalism project seeking solutions to challenges faced by modern societies in an age of rapid change.
Press play to listen to this article
Voiced by Amazon Polly
A conversation on what makes a livable city.
By AITOR HERNÁNDEZ-MORALES
Send tips here | Tweet @aitorehm | View in your browser
Happy Thursday, city lovers, and welcome back to POLITICO’s Living Cities project.
Summer is lazily drawing to close, and that means that as we say goodbye to days away from the office and at the beach. We’re also about to say tschüß to Germany’s national €9 monthly public transport ticket, which since last June has allowed travelers unlimited access to all buses, trams, metros and other means of local transport, as well regional trains running on intercity routes throughout the country.
With the scheme nearing its conclusion, many are already asking: Did it meet its objective of persuading car-owners to ditch private vehicles in favor of public transport? Or was it an overblown stunt that was as frivolous as a summertime fling?
We dig into it after the jump.
END OF THE LINE FOR GERMANY’S €9 TICKET: There’s no question that Germany’s state-subsidized monthly ticket scheme has been wildly popular. Since its launch in June, around 38 million residents and visitors have bought the tickets that allow riders to use local and regional transport for a mere €9 a month.
Lindner says no: But despite the popularity of the scheme, there are no plans to extend it past its end date on August 31. According to liberal Finance Minister Christian Lindner, it would be way too costly to extend the initiative, which was subsidized with €2.5 billion in public cash. “Almost free public transport is not something we can afford in the long term,” he said earlier this month. 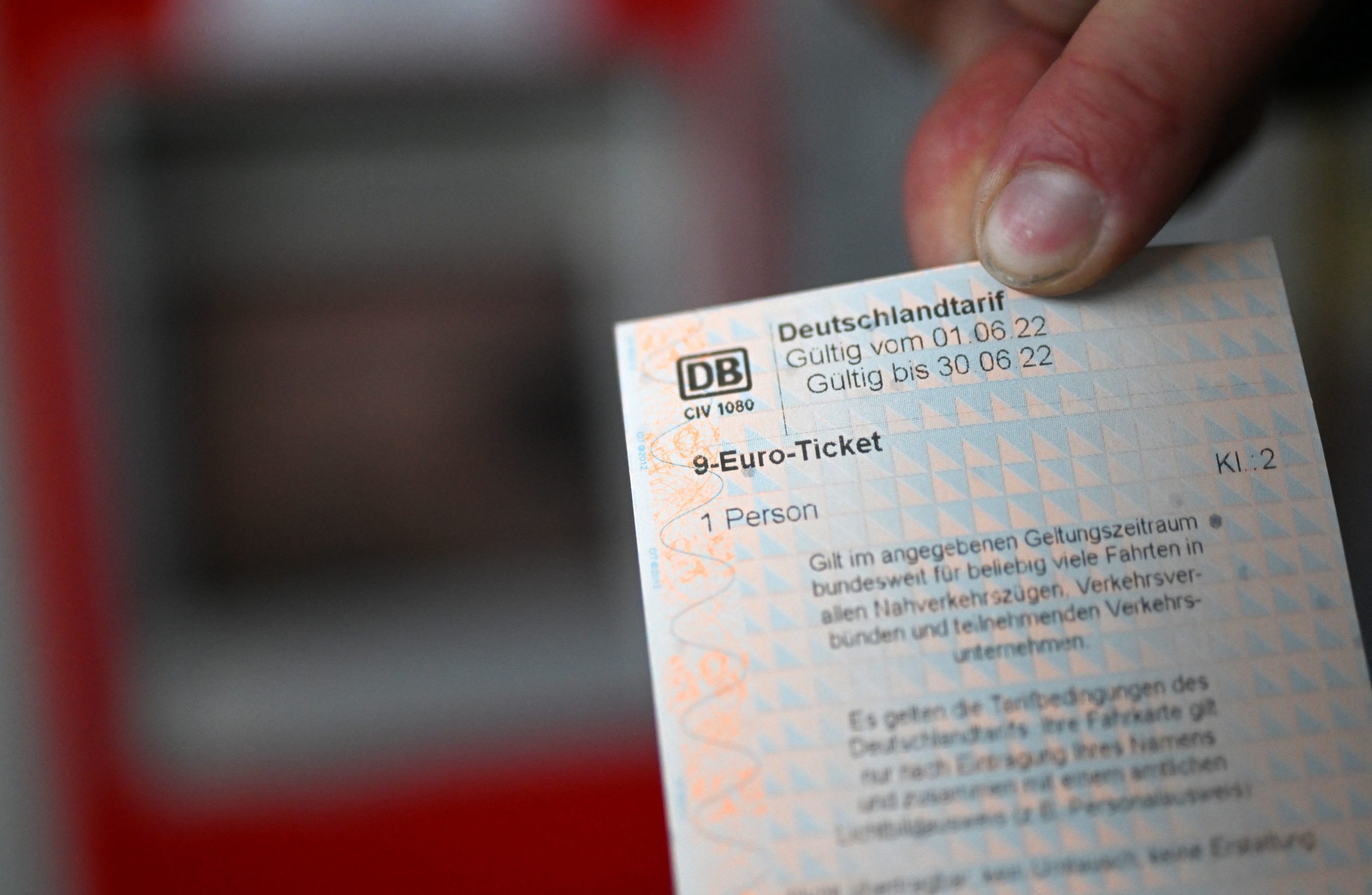 Germany’s €9 ticket | Ina Fassbender/AFP via Getty Imagese
So was it worth it? A comprehensive study of the three-month scheme won’t be issued by Germany’s Transport Ministry until November, but initial data indicates the initiative met its base objectives of curbing inflation and relieving a cost-of-living crunch while also offering an incentive for motorists to ditch their cars.
Rail boost: Germany’s Federal Statistical Office found one-fifth of Germans used public transport regularly for the first time thanks to the €9 ticket; it also found a 42 percent increase in rail travel through June and July compared to the same period in pre-COVID 2019.
Inflation buster: Meanwhile, a study by the Cologne Institute for Economic Research affirmed that the elimination of the cost of transit from household budgets — a monthly pass covering only the center of Berlin usually costs €86, while in Hamburg it’s €115 — helped trim soaring inflation by up to 2 percentage points.
Cleaner air: And researchers at the University of Potsdam said the ticket had driven a 6 to 7 percent decrease in air pollution levels across Germany — with the effect greatest during the working week and in urban areas.
Auf wiedersehen? Though the €9 ticket may be on its way out, there are already various ideas for resuscitating it in different forms. The German Greens propose funding a €29 ticket for unlimited regional transit and a €49 ticket for unlimited nationwide travel by eliminating tax relief for polluting industries. The leader of Bavaria’s Christian Social Union, Markus Söder, supports the creation of a €365 yearly train pass. And the Association of German Transport Companies made its own proposal for a €69 monthly ticket valid across the country, which it estimates would require a €2 billion annual public subsidy. 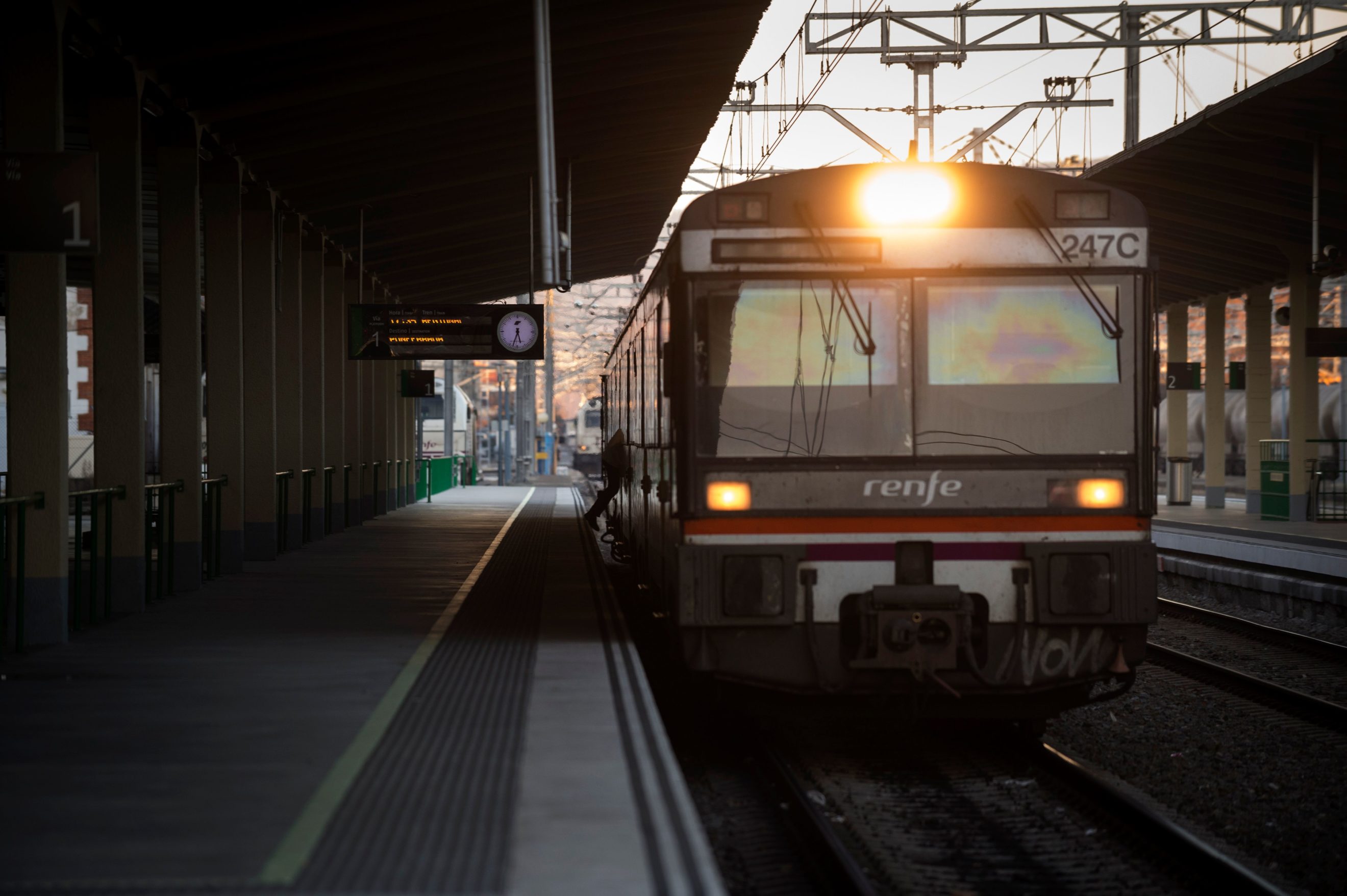 From September 1 until December 31 all local and mid-distance travel on Spain’s state-owned railways will be free | Miguel Riopa/AFP via Getty Images
Hasta ahora: While the discount ticket may soon be gone in Germany, the fun’s just about to start in Spain. From September 1 until December 31 all local and mid-distance travel on the country’s state-owned railways will be free. The measure follows up on a Spanish government scheme to finance a 30 percent discount on multitrip tickets for urban transportation systems throughout the country this fall.
Now read this: The full report on Germany’s €9 scheme and other models from around the EU from my colleagues Joshua Posaner, Wilhemine Preussen and Laurenz Gehrke.
MISSED THE MARK: Copenhagen, is giving up its goal of becoming the world’s first CO2 neutral capital by 2025. According to Mayor Sophie Hæstorp Andersen, the Danish capital has already reduced its CO2 emissions by 80 percent, but to become completely neutral it would need to eliminate the emissions generated by the Amager Resource Centre (ARC) incinerator. The ARC recently cancelled plans to build a plant to capture the CO2 it emits after determining it was ineligible for funding through the Danish government’s DKK 8 billion (€1.07 billion) Carbon Capture and Storage (CCS) fund. “It’s a shame we won’t reach it by 2025,” said Hæstorp Andersen. “But that’s not the same as saying we won’t make it by 2026, 2027, or 2028.” 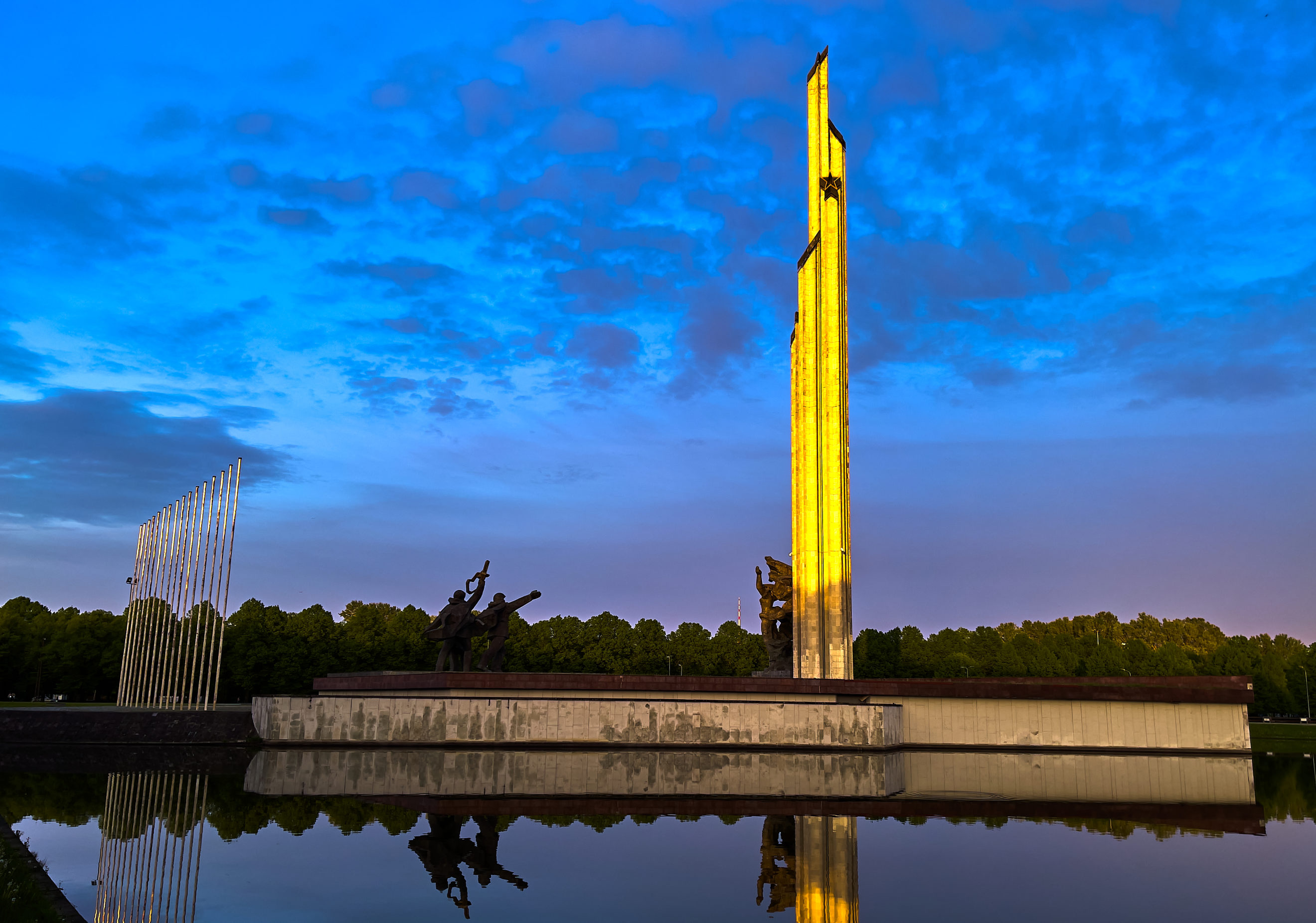 The Soviet-era monument in Riga’s Uzvaras Park commemorating the Red Army’s victory over the Nazis in WWII | EyesWideOpen/Getty Images
SCRAPPING SOVIET STATUES: This week, Riga began the process of tearing down a Soviet-era statue in the Latvian capital’s Uzvaras Park that commemorates the Red Army’s victory over the Nazis in WWII. Earlier this month the local government announced plans to demolish the statues and giant pillar topped by Soviet stars, arguing the monument glorified the occupation of Latvia and Russia’s ongoing war crimes. The move follows the Estonian government’s decision to dismantle a Soviet memorial in Narva, a Russian-speaking city located on the Russian border, as part of a larger push to remove all Soviet war monuments from public spaces.
RISING FROM THE RUINS: The mayors of Florence, Athens, Helsinki, Lyon, Marseille, Oslo, Riga and Tirana travelled to Kyiv this week to sign a political agreement supporting the sustainable rebuilding of Ukrainian cities. The pact, backed by city lobby group Eurocities and Ukraine’s Congress of Local and Regional Authorities, lays out the groundwork for collaboration between local leaders across the EU and within Ukraine. Read it here.
MOVE LIKE THE DUTCH: Nearly 700 million tons of carbon pollution would be saved each year if every person adopted Dutch levels of bike usage, a new study in the journal Communications Earth and Environment shows. Another key takeaway: The main barrier to increased uptake of cycling in developed countries is fear “related to riding on the road alongside motor vehicles.” Install better, safer cycling infrastructure — in other words, go Dutch!
Uber in Brussels: Ride-hailing company Uber has told POLITICO that it is working to integrate regular Brussels taxis into its platform to comply with new local regulations. That means Brussels residents and visitors will be able to order a regular taxi through Uber’s app, writes Pieter Haeck.
WATER WORRIES: Portugal’s government recommended 43 municipalities temporarily increase water prices for their biggest consumers and suspend street-cleaning and watering in public parks and gardens.
ELECTRIC FERRIES: Decarbonizing ships is a major challenge for waterside EU cities that currently rely on fossil fuel-powered ferries to move residents across wide rivers or bays. In Stockholm, local authorities are aiming to tackle that problem with super-fast electric ferries that will be capable of transporting passengers from the Swedish capital to the numerous islands in its immediate vicinity. 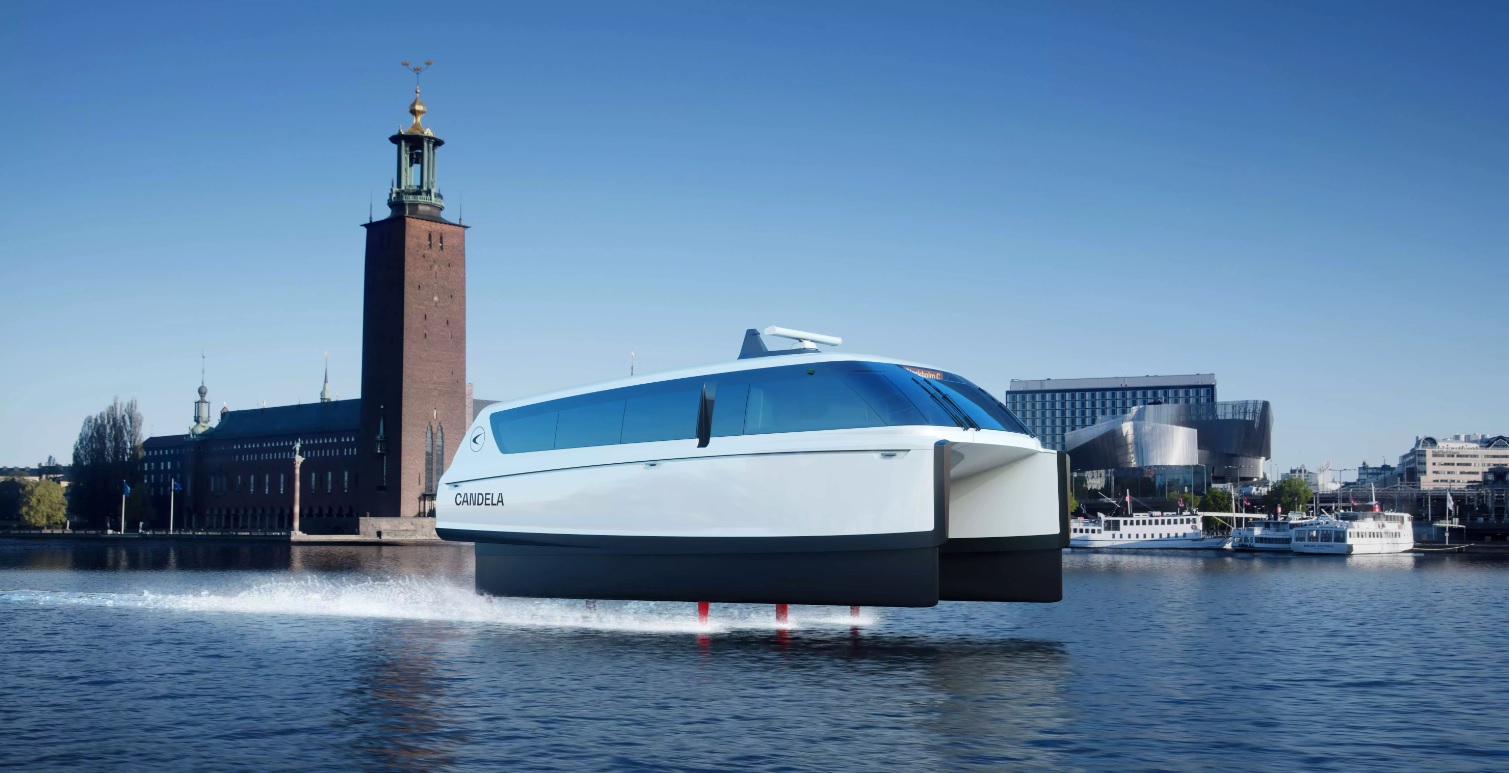 A rendering of the super-fast electric ferries set to debut in Stockholm next year | Candela
As part of a partnership with the Swedish Transport Administration, Stockholm-based startup Candela is developing an electric-powered hydrofoil craft that producing virtually no wake, which would exempt it from Stockholm’s tight speed limits. The plan fits with Sweden’s ambition to cut transport sector emissions by 70 percent by 2030.
According to Gustav Hemming, a local lawmaker for the Stockholm region with responsibility for ferries, the technology could be a “game-changer” because it will allow shorter journeys and zero emissions.
Here’s Charlie Duxbury’s full report on the scheme, which is expected to start next spring and run over four years at a cost of around €1.9 million.
I’ve recently become obsessed with animator Jan Kamensky’s Visual Utopias project, through which he creates renderings of iconic European thoroughfares with cars magically plucked out and busy roads replaced with cycle lanes, pedestrian paths and gardens. 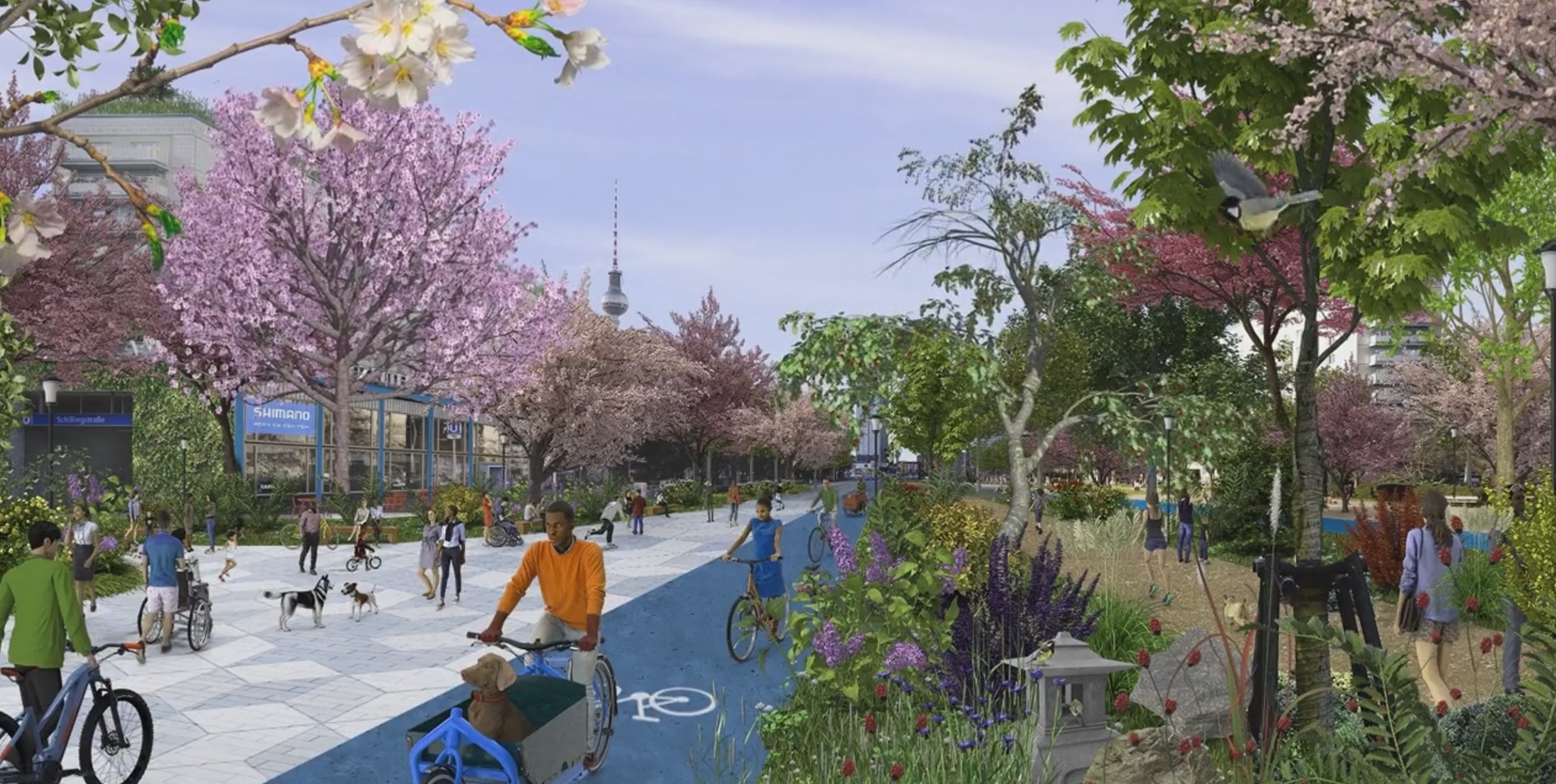 Kamensky’s vision of a greener Karl-Marx-Straße in Berlin | Jan Kamensky
Our question for you this week: Which famous square or boulevard would you like to see go car-free and why? Send me your thoughts here.
— I was fascinated to read about land artist Michael Heizer’s City project, a vast complex of outdoor structures and landmasses that has been built over the course of 50 years in the Nevada desert; The Art Newspaper has a write-up of the mile-long structure, which opens next week.
— Cars dominate the ads in most soccer stadiums, but this week I was delighted to read that the Bundesliga’s SC Freiburg, hometown team of one of Germany’s greenest cities, is buckling that trend. They have made company bike leasing group JobRad its exclusive mobility partner. The move is meant to underline the team’s “passion for cycling” and motivate fans to commute sustainably.
— In a great interview in Mensagem de Lisboa, Ton Salvadó — the man responsible for Barcelona’s first “super-blocks” — declares that “eliminating cars from cities may be a utopian idea, but the world is driven by utopias.” Indeed.
THANKS TO: Giovanna Coi, Wilhemine Preussen, Joshua Posaner, Laurenz Gherke, Zia Weise, Pieter Haeck, Charlie Duxbury, my editor James Randerson, and my producer Giulia Poloni.
Log in to access content and manage your profile. If you do not have an account you can register here.