Artists and creatives might need a waterfall of colors in an airy space or residence to toy with and unleash their creative selves, and 4Rooms in Kastellorizo, Greece has carved out just that. Just by pronouncing its name – a portmanteau of ‘forums’ – already preludes that 4Rooms is meant to be a space for creative discussions and brainstorming sessions. Pastel-toned furniture meets irregularly shaped fixtures. Playful colors mesh with earthy hues, a contrast to hush down oversaturated ambiance while maintaining the leeway to tap into one’s creative spirit.

The mastermind behind the recently inaugurated space is Silvia Fiorucci, the President and Founder of La Società delle Api and an avid art collector. She wanted to continue the project which had already started in her house Grasse in collaboration with Villa Noaille. The entrance of 4Rooms continues the dialogue between her two favorite places, the house she lives in and the house she hosts the community of artists, designers, and creatives. Fiorucci opens the doors of the renovated and historical Porta Rossa house to those who want to use the spaces inside the three-level home as studios to produce their new projects and reflections.

The President and Founder says she asks nothing in return but only ‘seek to share experiences through which something useful can be built. I believe in the power of curiosity and in giving creators absolute freedom. To put it simply, I live the dream of helping develop ideas through the places that I love and feel a deep connection to.’ 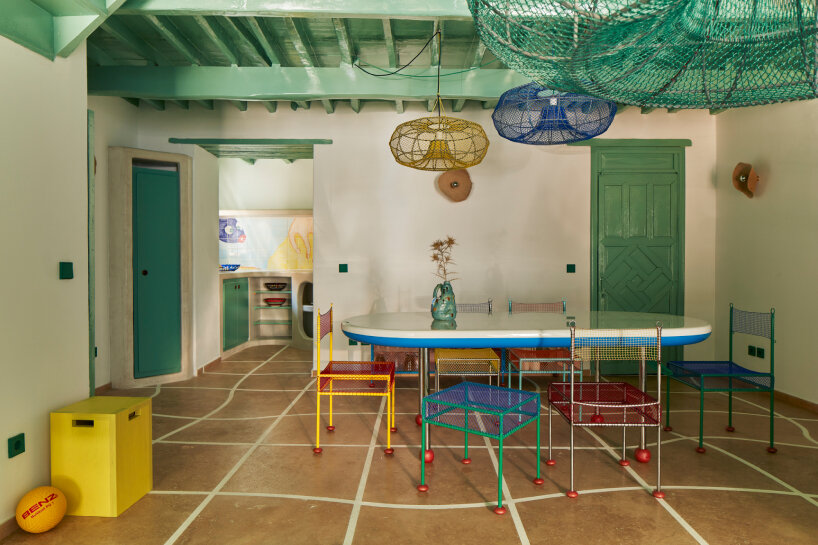 4Rooms in Kastellorizo, Greece acts as a residency-program home for La Società delle Api, curated by Annalisa Rosso who worked with international designers to promote an exchange between contemporary and global creativity and Mediterranean culture and heritage. The designers of 4Rooms include Phanos Kyriacou (Cyprus), Julie Richoz (France), Studio Brynjar & Veronika (Iceland – Germany), UND.studio (Germany), while Superpoly was commissioned to design the common spaces located on the ground floor of Porta Rossa.

Pushing through the red doors at the entrance – a reason the house is called Porta Rossa – residents immediately find themselves in the heart of the living room, bathed in a blue-green ceiling with tinges of complementing elements from the stark blue shelf and the ocean-inspired tile works from the nearby kitchen. Going up, saturated blue covers the walls and stairs before a purple door greets the residents.

Once they open it, a bright red room stuns their vision and halts their steps, and if they wish, they can amplify the zest-filled experience through the hazy blue bathroom next door. When the time to relax comes through, residents can proceed upstairs to mellow out inside one of the rooms designed in wood and earth tones that signal a moment to slow down and think. Touches of vibrancy still appear as strikes of vivid colors underline some of the furniture and fixtures. 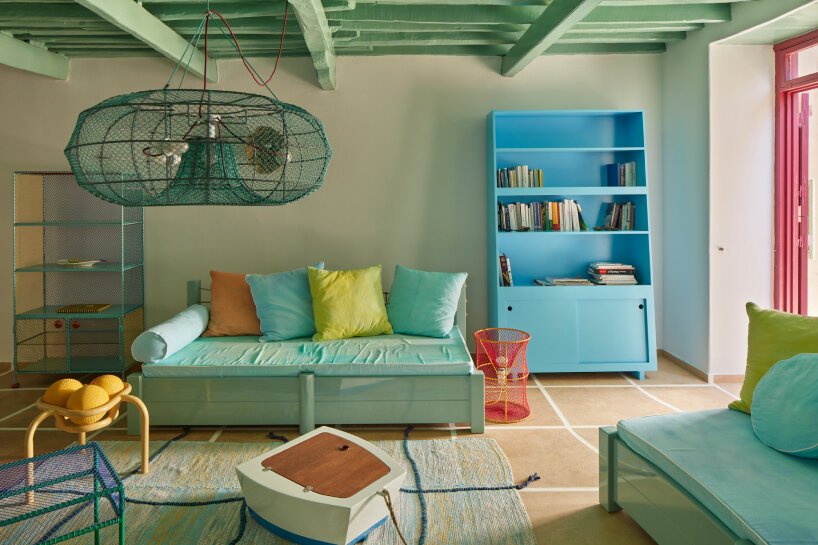 4Rooms curator Annalisa Rosso says that the designers involved in the creation of the project have been able to absorb the history, community, and geography of the Kastellorizo island, the driver that nudged them to anchor specific architecture as a key design approach. The congruence of international designers and studios in a single space flourishes into the manifestation of diverse creative languages, now shared with other artists, designers, and creatives as they step inside 4Rooms for their residency programs.

Rossa adds that the designers have put themselves to the test by experimenting with pre-existing objects and materials native to the property to create, as she puts it, original reinterpretations, engaging local realities, and inventing novel solutions. ‘The result is a radical and courageous work and a new way of thinking about design: the sense of space itself, the idea of function. It has been an open and inclusive design practice, one formulated in the welcoming style typical of La Società delle Api,’ she adds. 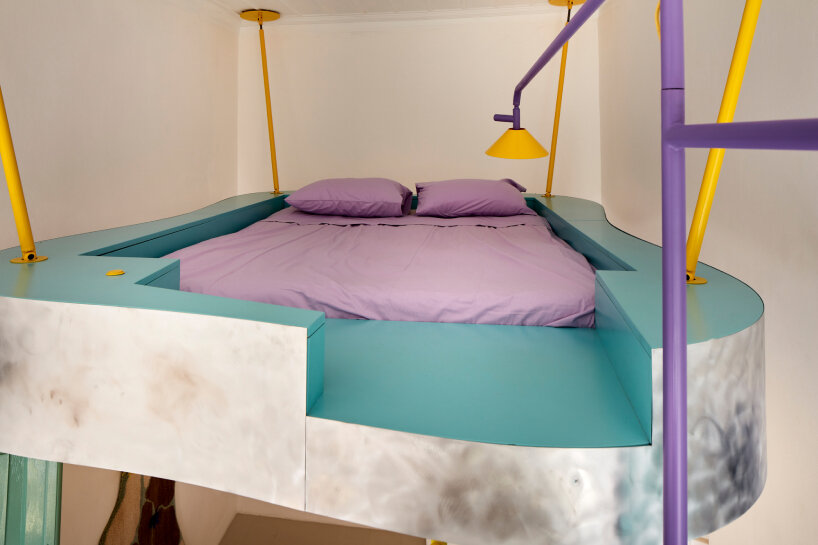 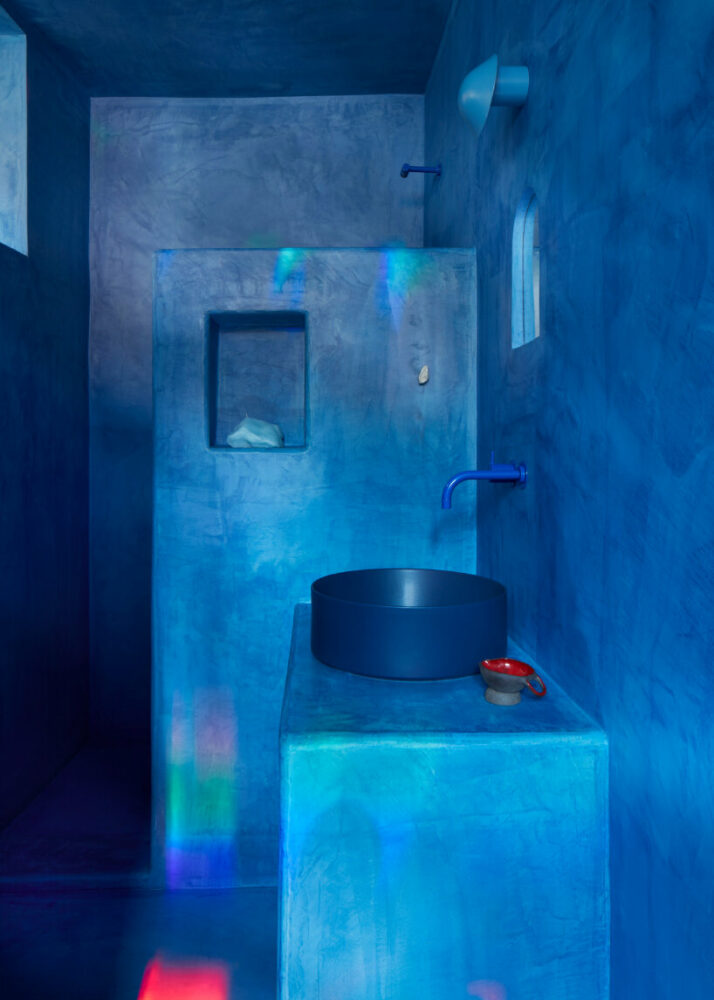 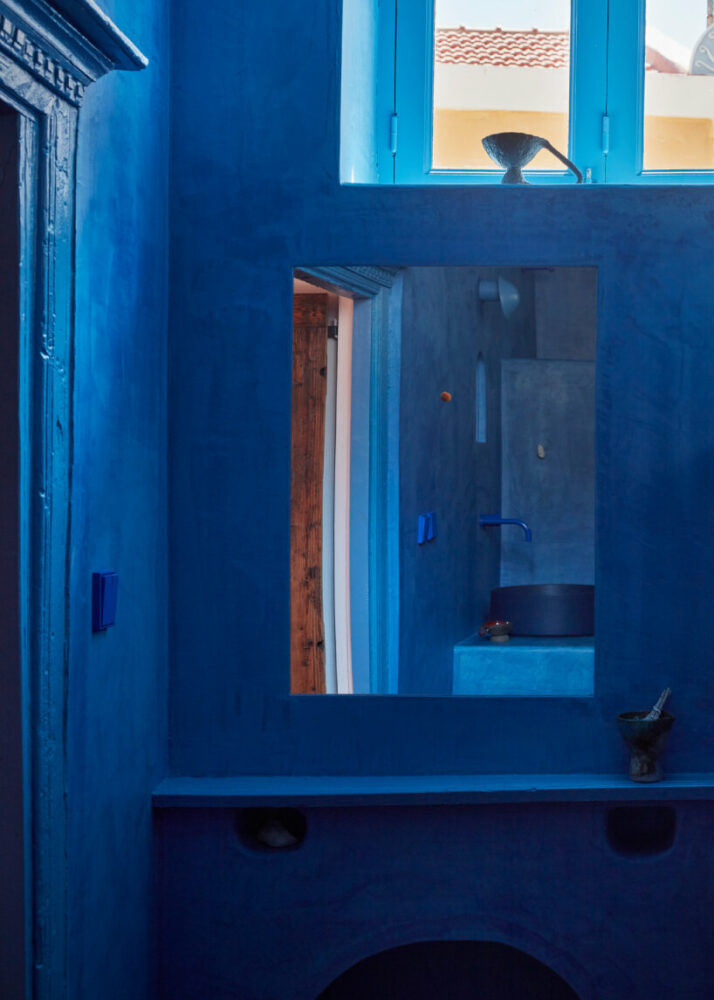 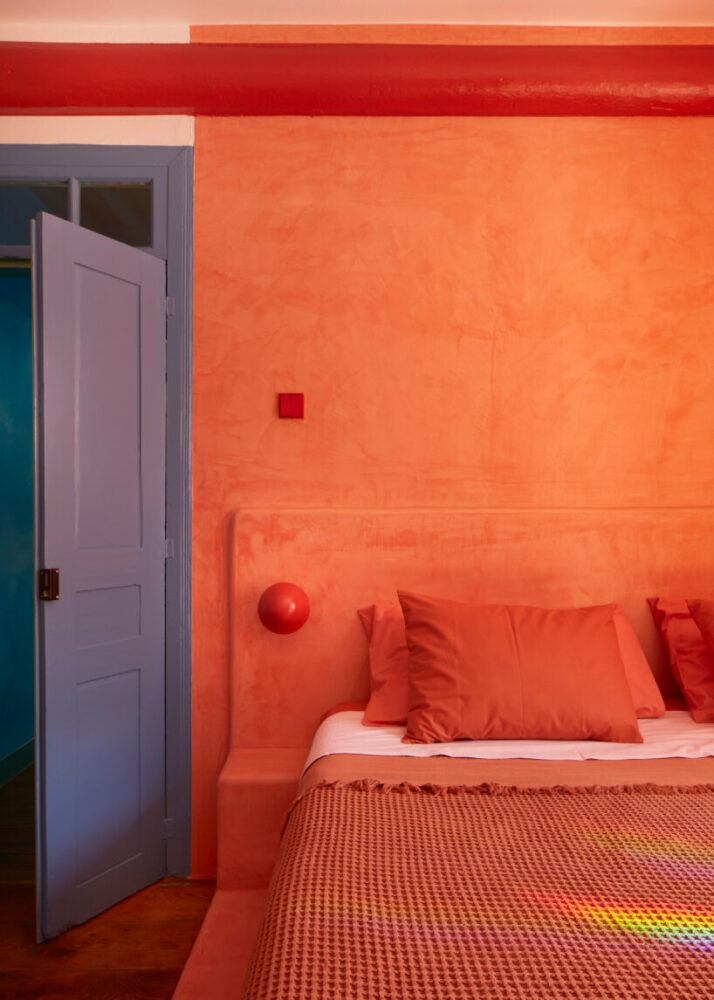 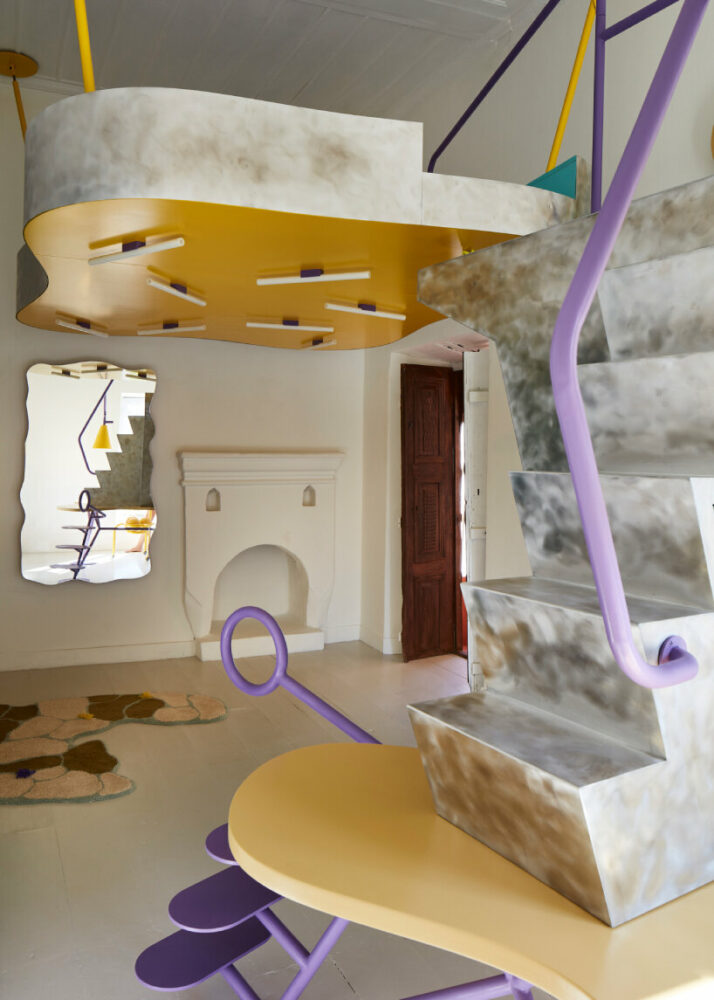 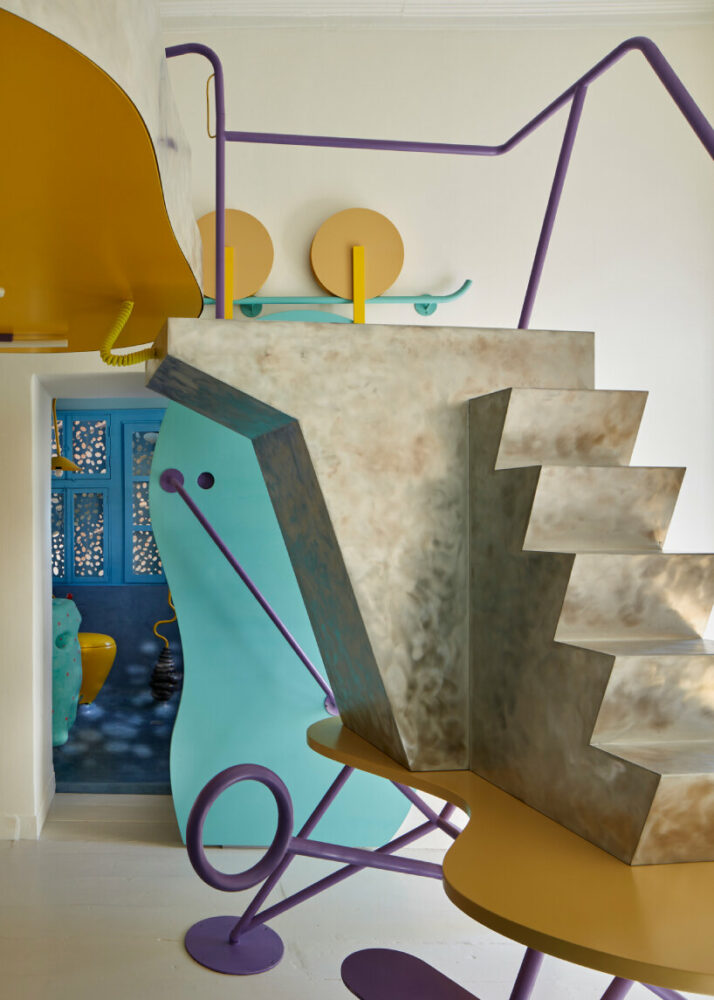 concrete stairs leading to the bed