PRESS RELEASE:
VIRGINIA BEACH, VA. (November 10th, 2022) – The Military Aviation Museum is excited to announce its acquisition of a rare Mitsubishi A6M3 Zero, formerly of the Imperial Japanese Navy, which has undergone a meticulous restoration at Legend Flyers in Everett, Washington.  Members of the Museum team and the Fighter Factory are headed to the West Coast, to work with the Legend Flyers team and put the aircraft through its pre-flight process. 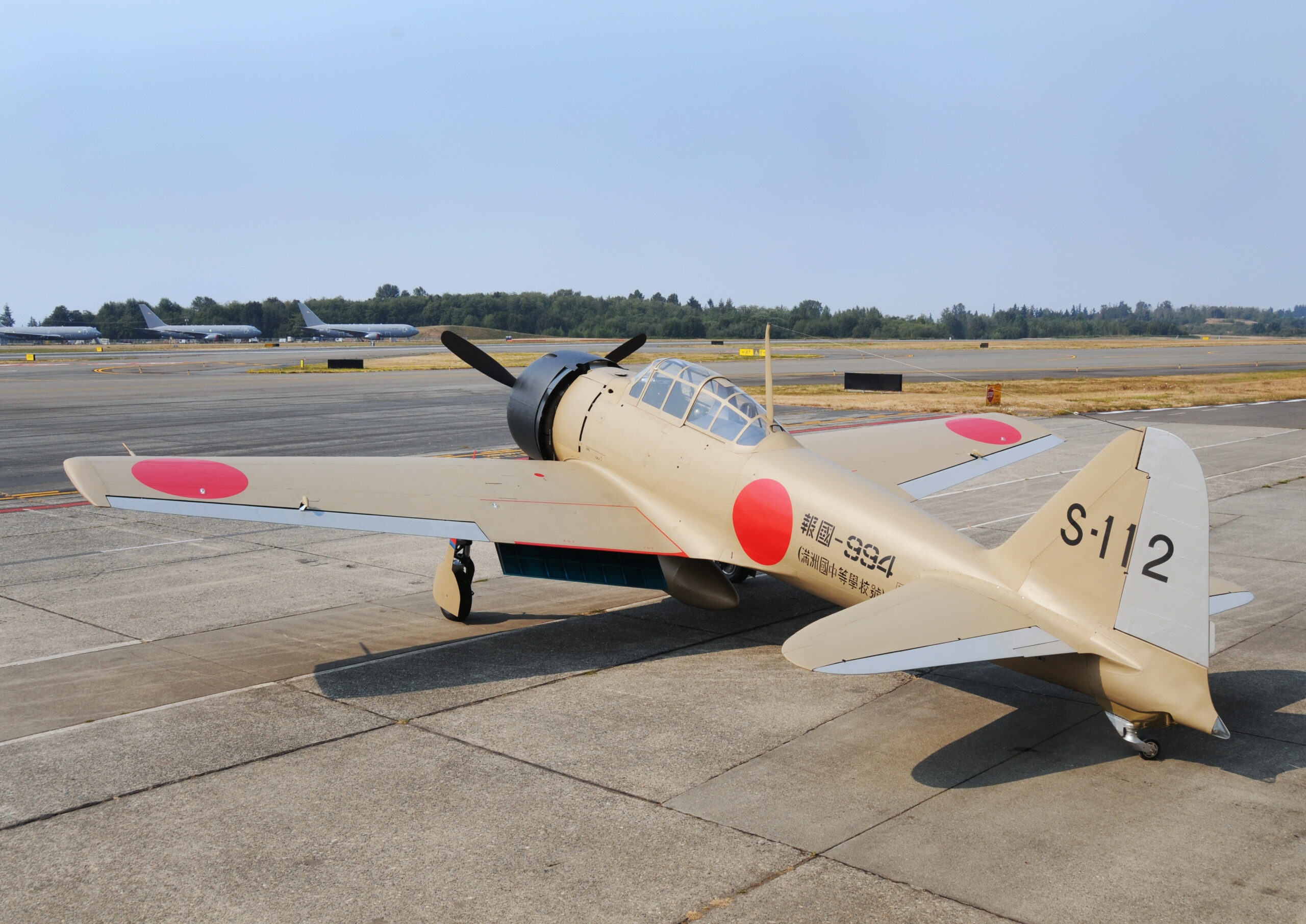 The principal American adversary in the Pacific Theatre of Operations during WWII, and the Imperial Japanese Navy’s (IJN) premier carrier-based fighter, the A6M was perhaps better known as the ‘Zero’. Mitsubishi Heavy Industries completed A6M3 c/n 3148, the specific aircraft which the Museum has obtained, during September 1942. Although the Allies officially referred to the A6M  by their code word for the type, ‘Zeke’, the A6M3 variant received its own code name of ‘Hamp’. Even so, Allied pilots often simply referred to them as Zeros. This name derives from the IJN’s designation for the aircraft as a Type ‘0’ Carrier Fighter (for the last digit in Imperial Year 2600, when the aircraft was first designed).
A6M3 c/n 3148 is painted in its original wartime markings, replicated from the vestigial remains of an unusual set of markings detected on the original fuselage skins which indicate that middle schoolers in Japanese-occupied Manchuria had donated the funds necessary for the aircraft’s manufacture. 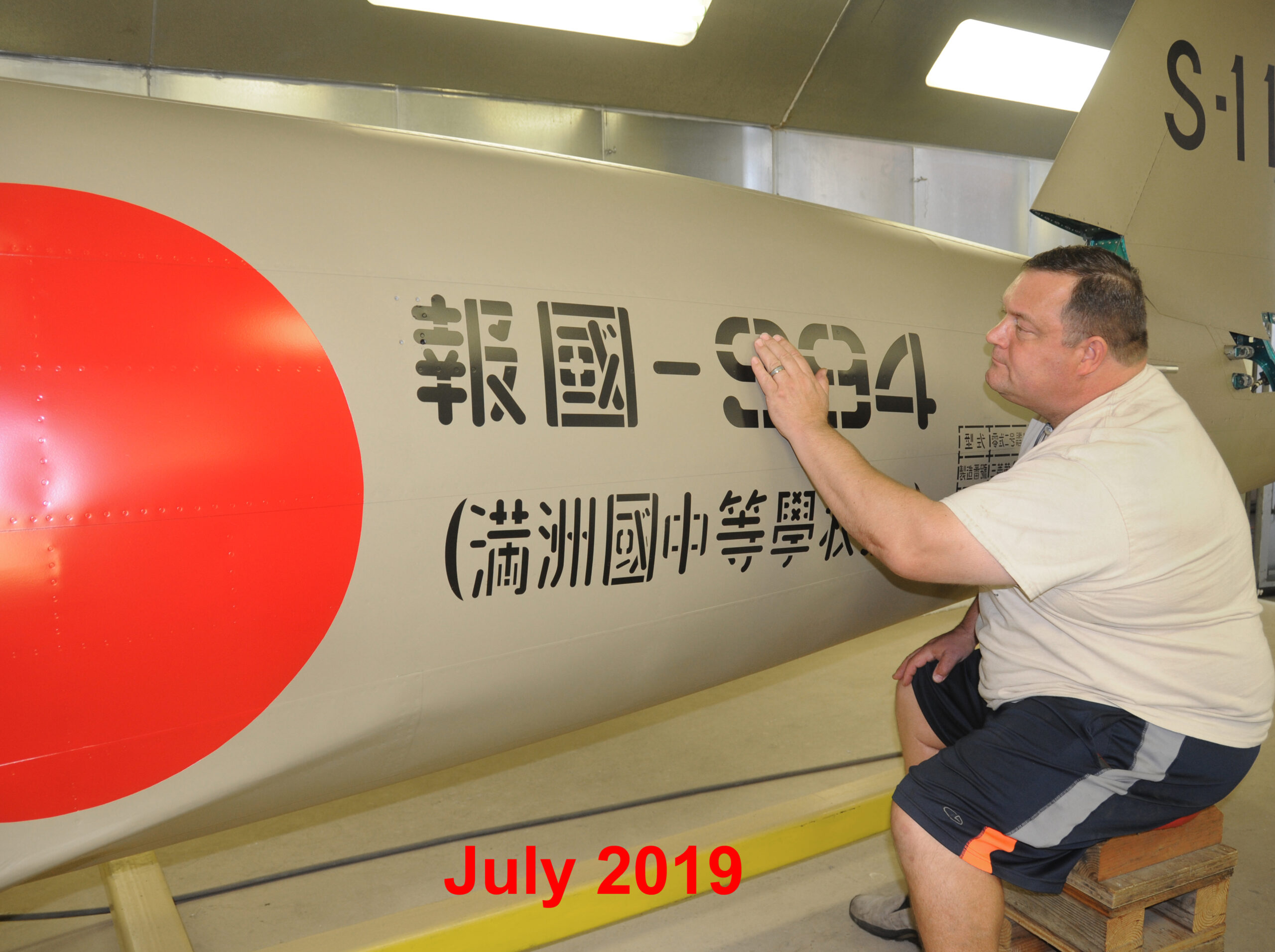 Like many aircraft in the Museum’s collection, the newest addition features an interesting combat history, having been stationed at bases across the South Pacific. Research conducted by Legend Flyers, the aircraft’s restorers, suggests that 3148 deployed to the Pacific as part of the 252nd Kokutai (Naval Air Group). Later it would fight from bases at Rabaul, as well as Ballale and Munda, in the Solomon Islands, before being ordered to Taroa in the Marshall Islands in March, 1943. During its career, 3148 would see combat against the US Army Air Forces and US Navy aircraft, although it would be shrapnel damage from a bomb blast and not a fiery conflagration in the air, which would end 3148’s career. Damaged beyond the repair capabilities of the Japanese mechanics on the island, 3148 would sit adjacent to the runway on Taroa until 1991, when an American named John Sterling recovered the wreck and brought it to the United States with the hopes of restoring the fighter to flight.
With several changes of ownership, the aircraft eventually found its way to Legend Flyers of Everett Washington in the Spring of 2011. Work on the aircraft began in earnest a decade ago, and the aircraft is expecting its first post-restoration flight imminently.
Museum Director, Keegan Chetwynd, in describing the process behind the aircraft’s purchase noted: “Aircraft acquisitions by the Museum are always a carefully thought out endeavor. Restorations represent a significant investment of time, and of funding, requiring that they be planned out long in advance.” Chetwynd went on to say, “The Museum has a collection plan that has identified airplanes that are key to sharing the narrative of World War II with a modern audience, and the Zero was one of the Museum’s highest priority targets.”
Certainly, an airplane that defined the American experience of the air war in the Pacific from the very moment it appeared overhead at Pearl Harbor, the Zero has also lived on in movies and video games, making it something of a pop culture icon. Museum Curator Zack Baughman explained: “It is an aircraft our visitors are always asking about. As one of our chief adversaries in World War II, there is a fascination with the Zero that is hard to explain.” Baughman then remarked: “It really is amazing to see a restored aircraft from World War II in person, knowing that it has been rescued from a battlefield, it brings history to life in an important way.”
Joining just a handful of other preserved examples, the Military Aviation Museum’s Zero will shortly be taking its first flight since the final year of WWII, as a necessary step forward in a flight program which will see the aircraft returned to the Museum, located in Virginia Beach. For those interested in following the journey, the Museum will be providing updates to its Members and followers on Facebook. If you have any questions, please call (757) 721-7767 or visit https://militaryaviationmuseum.org/. The Military  Aviation Museum is located at 1341 Princess Anne Rd, Virginia Beach, VA 23457.
About the Military Aviation Museum
A 501 (c)(3) not-for-profit organization, the Military Aviation Museum is home to one of the world’s largest collections of airworthy military aircraft from the first 50-years of flight. Truly a living museum, its aircraft are in restoration at facilities around the world. Besides the main Museum the Virginia Beach complex features additional exhibition spaces, including a mid-1930s Luftwaffe hangar, originally from Cottbus, Germany, which now serves to house the Museum’s collection of WWII-vintage German aircraft. Additional structures include the WWI Hangar, and the original control tower from RAF Goxhill built in England in 1942. Visit www.militaryaviationmuseum.org for more information or call 757-721-7767.

Planes, Trains & Santa! at Military Aviation Museum on Thanksgiving Weekend
‘Plane Talks’ Return to The National Museum of The U.S. Air Force in Honor of Veterans Day
Your email address will not be published.


by Richard Mallory Allnutt (Editor) Words are usually my strongest ally, but I am unsure where or even how to begin… I have written and re-written these opening lines a dozen times or more. We […]
Copyright © 2017 – Warbirds News. All Rights Reserved.